Explore the Poetry in Motion collection

It would have pleased Walt Whitman, that poet of urban motion, to envision his words coursing by electrified rail through a diverse, global city of 8 million souls.

Since 1992, when it first displayed an excerpt from Whitman's "Crossing Brooklyn Ferry," MTA's Poetry in Motion program has brought more than 200 poems or excerpts before the eyes of millions of subway riders and rail commuters, offering each a moment of timelessness in the busy day.

After a hiatus of four years, from 2008 through 2011, the popular program returned in March 2012 under the aegis of Arts & Design. The revived program displays two new poems each quarter, on "car cards" in the New York City subway cars and in digital screens at subway stations.

The poems are chosen in collaboration with the Poetry Society of America. The artwork accompanying the poems is drawn from permanent installations on view in the Arts & Design program, often based on the sketches provided by the artists in their preparatory designs.

Inspired by a similar program in London, Poetry in Motion was launched by MTA New York City Transit in 1992. From the beginning, works for series were selected by representatives from the MTA and the Poetry Society of America. The first four poems to appear were "Crossing Brooklyn Ferry" by Walt Whitman, "Hope is the Thing with Feathers" by Emily Dickinson, "When You Are Old" by William Butler Yeats, and "Let There Be New Flowering" by Lucille Clifton.

For the first nine years of the program's existence, the poems appeared on overhead "car cards" under a specially designed masthead featuring mosaic tile art from a number of subway stations. To celebrate its 10th anniversary in 2002, the program introduced a new masthead with elements from "Una Raza, Un Mundo, Universo (One Race, One World, One Universe)," an MTA-commissioned mosaic mural by the artist Jose Ortega at the 149th St subway station on the  and  lines.

By the time of its 10th anniversary, Poetry in Motion had displayed more than 150 poems or excerpts by writers from around the world spanning 25 centuries, from the Chinese sage Lao Tzu to the contemporary Russian Vera Pavlova. The program was retired in 2008, to be replaced temporarily by Train of Thought prose excerpts. By then it had circulated more than 2,000 poems nonstop across the MTA's 5,000-square-mile travel region.

In that time, Poetry in Motion also sponsored many events and readings by noted poets, including Rita Dove, Galway Kinnell, Stanley Kunitz, and Sonia Sanchez, and was cited for several awards, including the New York Press Club's "Heart of New York Award" (1994), the Municipal Art Society's Certificate of Merit (1994), and a special proclamation from the Council of the City of New York for its "invaluable contribution to the people of New York City" (2000).

After a four-year absence, Poetry in Motion was reborn in March 2012 under the aegis of Arts & Design, once again in collaboration with the Poetry Society of America. The revived program appears on larger "premium square" car cards under a new logo. Each poem is matched with art elements from permanent works in the Arts & Design program.

The inaugural poster in the new series, which rolled out across the transit system on May 27, 2012, combined art from Joan Linder's "The Flora of Bensonhurst," installed at the 71 St subway station on the line in Brooklyn, with the poem "Graduation" by Dorothea Tanning, an American poet, writer, and visual artist who died in January 2012 at the age of 101 at her home in Manhattan. The program selects and displays two poems each quarter on New York City Transit subways.

The Poetry Society of America

Founded in 1910, the Poetry Society of America (PSA) is the oldest poetry organization in the country and reaches more people with poetry on a daily basis than any other literary association in America. Members have included W. H. Auden, Langston Hughes, Robert Frost, Marianne Moore, and Wallace Stevens.

Representatives from the MTA Arts & Design and the PSA collaborate on the selection of poems for the program. A complete poem or excerpt by an established poet must be short enough to be readable on one of our subway or bus cards. The PSA secures the rights to reprint the poems and arranges poetry readings to promote the program. Poets who have participated in Poetry In Motion events include Rita Dove, Fanny Howe, Stanley Kunitz, Sharon Olds, and Sonia Sanchez.

For more information about the Poetry Society of America, visit its web site or contact them here.

Guide to Poetry in Motion

Poetry in Motion has brought poetry into New York's public transit for nearly 30 years, thanks to a long-standing partnership between the MTA and the Poetry Society of America.

This guide compiles all Poetry in Motion poems since 2012, featuring designs by Tess O'Loughlin that celebrate the unique dialogue of poetry and artwork commissioned by MTA Arts & Design.

You are invited to enjoy the poems that have appeared in the subway, learn about the poets and artists, locate the original artwork in the MTA system, and listen to a selection of poems read by the poets. Use the audio button or click on the video to hear poems read aloud by the poets and other notable personalities.

"The Best of Poetry In Motion," an anthology published by W.W. Norton & Company in 2017, is available for purchase through the New York Transit Museum store. 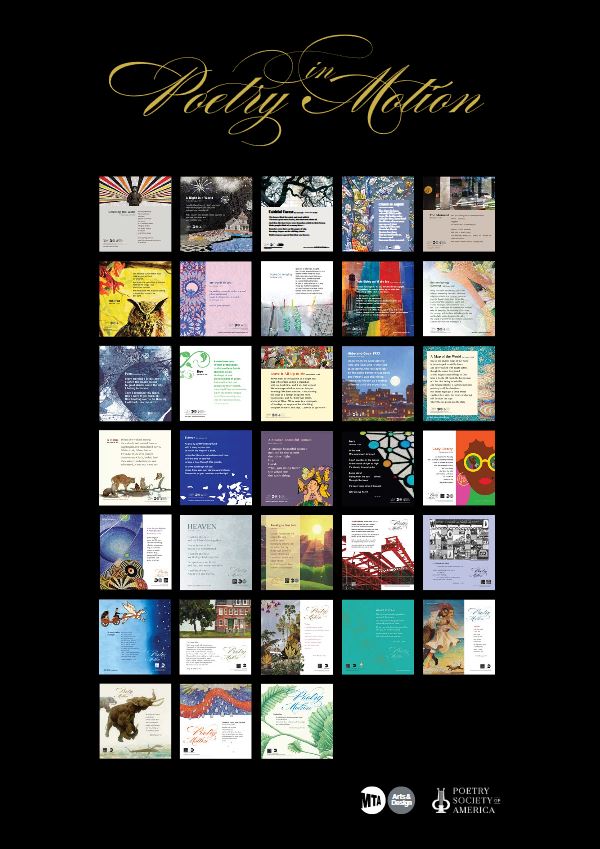 Compilation of Poetry in Motion

🔈 Running video of poems read by the poets and guest readers 🔈