The safety of our customers, employees and the general public is the MTA's top priority. We take seriously public concerns about air quality in the L tunnel and in the stations along the L during this period of construction and have adopted very conservative standards for exposure of the public to dust and silica, a part of the dust generated by the demolition of concrete. Additionally, we strictly adhere to all federal and state occupational safety regulations for our employees.

Dust concentration standard and recorded levels: 10 February – 18 February 2020
Below are measurements of dust concentrations taken in the public space at the Bedford Av and 1 Av stations during the period from 12pm on Monday 10 February 2020 until 12pm on Tuesday 18 February 2020. The reporting period is extended due to the three (3) day weekend General Order. Dust levels before, during and after the work during this period were well below the conservative health-protective standard of 3000 µg/m3 of dust. This standard was established by the American Council of Government Industrial Hygienists to be health protective for people exposed to these levels for 8 hours a day over a 45-year working career. As there is no established standard exposure limit to dust for the short periods of time that a typical subway passenger will pass through the station, we are using this long-term chronic standard so as to measure against a very conservative health-protective benchmark.

Silica concentration standard
We are also monitoring public areas of the station for the presence of respirable crystalline silica in dust. As exposure to silica is typically a risk only for people exposed chronically over long periods of time, only long-term exposure standards are established. The Occupational Safety and Health Administration has established a long-term permissible exposure limit of 50 µg/m3 for workers exposed to silica for 8 hours a day over a 45-year working career. We worked with experts in public health to advise us on an appropriate short-term exposure benchmark and found that limiting concentration of 1000-3000 µg/m3 would be health protective for the duration that people are typically on a subway platform.

Silica measurement methodology
Silica can’t be measured directly but requires sampling of dust by directly capturing it over a 6-10-hour period and then analyzing the physical properties of the dust in a testing lab over a 2-3 day period.  Based on our experts’ study of actual conditions on the L Train project at dust concentrations of 600 µg/m3, concentration of silica would be at or below the long-term, 45 year 50 µg/m3 standard.  For customer comfort, we will seek to keep dust levels below this level despite the fact that health protective standards are much higher.

Silica recorded levels: 10 February – 18 February 2020
Samples were collected and analyzed throughout the weeknight work on 10 February 2020 through 13 February 2020, and during and after the construction period over the weekend of 14 February - 18 February, at two locations each on the 1 Ave and Bedford Ave station platforms for a total of 40 samples. There was not enough silica present in any of the 39 of the 40 samples collected to return a result that is greater than the level of sensitivity of the test. The one sample that has detectable levels of silica, at 6.70 ug/m3, is a very low level and well below the public health protective limit that was established for the project. 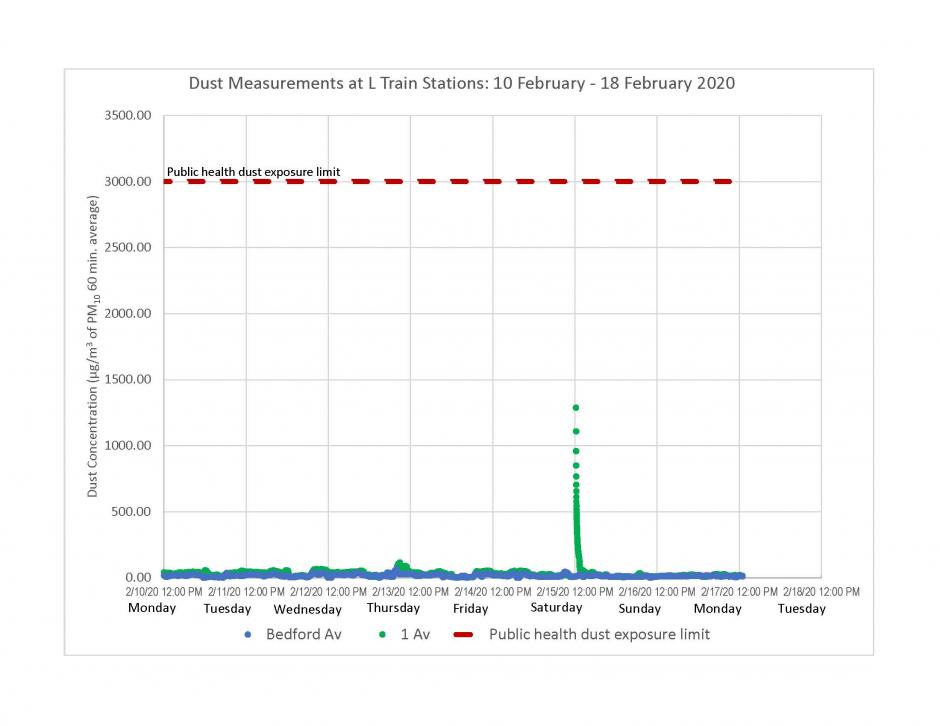