Skip to main content
BETAGo to old site
Schedules Maps Fares & Tolls Planned Work
Traveling during the pandemic
Remember: Masks are required when you’re riding with us. There is no subway service from 1-5 a.m.
Updated August 9th at 5:00am
Read more.

For languages other than English, use the Google Translate tool at the bottom of this page.

This report on existing conditions is the first step in the bus network redesign process. The goal is to take a fresh look at Brooklyn, its people, its travel needs, and what can be done to improve bus travel to meet those needs.

The Brooklyn Bus Network has not substantially changed in decades. The continuing decline in bus ridership in Brooklyn, and in New York City, requires a fresh look at how we provide bus service. Buses are slowing down and bus reliability is suffering. Over that same period, our customers’ needs have transformed dramatically. The bus network needs to evolve with them.

We will build a new bus network to meet those needs.

We created profiles for the existing routes in the Brooklyn Bus Network. Each profile contains information about ridership, frequency, span of service, and performance metrics. In the coming days, we will post information about each route to separate pages to make it easy for you review them and to help you get a better understanding of why we need to redesign the network. In the meantime, you can view or download the entire packet of route profiles using the links below.

Brooklyn at a Glance

Limitations of the Existing Network

Decreased wait time and increased frequency
Customers want more frequent bus service to shorten waits at bus stops. In the existing network, Brooklyn customers wait longer for the bus than they expect to, about two minutes on average for each trip.

Decreased travel time through faster buses
Customers want faster travel on buses to get to their destinations more quickly. Average bus speeds in Brooklyn are the second-lowest of the five boroughs, at 7.0 miles per hour (MPH) in May 2019, and have slowed 5% since 2014.

A more reliable network
Customers want buses to be more reliable and less bunched. Once on the bus, Brooklyn customers spend more time traveling to their destination than the schedule would indicate, about one minute on average for each trip. About one-third of the time, it takes customers five minutes longer than expected to complete their trip.

Improved connections to more places
Customers want access to more of the city than they have now, both within and between Brooklyn neighborhoods and onward to other boroughs.

Network simplification to increase ease of use
Customers want the bus network to be easier to use.

Public input is crucial to the development of this new network. Beginning in late October, we hosted public Open Houses to formally introduce the Brooklyn Bus Network Redesign Project, answer your questions, and get your feedback on what works and what doesn’t work with our current bus service. Click here for information on past events.

In the meantime, we want to hear from you. Submit a comment to share your thoughts, questions or concerns about your experience with the Brooklyn Bus Network, and any ideas or suggestions you may have.

This website will be updated to provide you with the most current information on upcoming public events and items for public review.

Following this report, we will develop a Draft Plan of a new bus network that reflects the findings in this report and the input we receive. The new draft bus network will be a ‘blank slate’ reimagining of the bus network, drawn from scratch. We will develop the Draft Plan with support and participation from NYCDOT. Additional public input sessions will be held following the release of the Draft Plan . We will ask the public to share their thoughts and provide input on adjusting the Draft Plan to better suit their needs. Input received will help inform the development of the Proposed Final Plan. 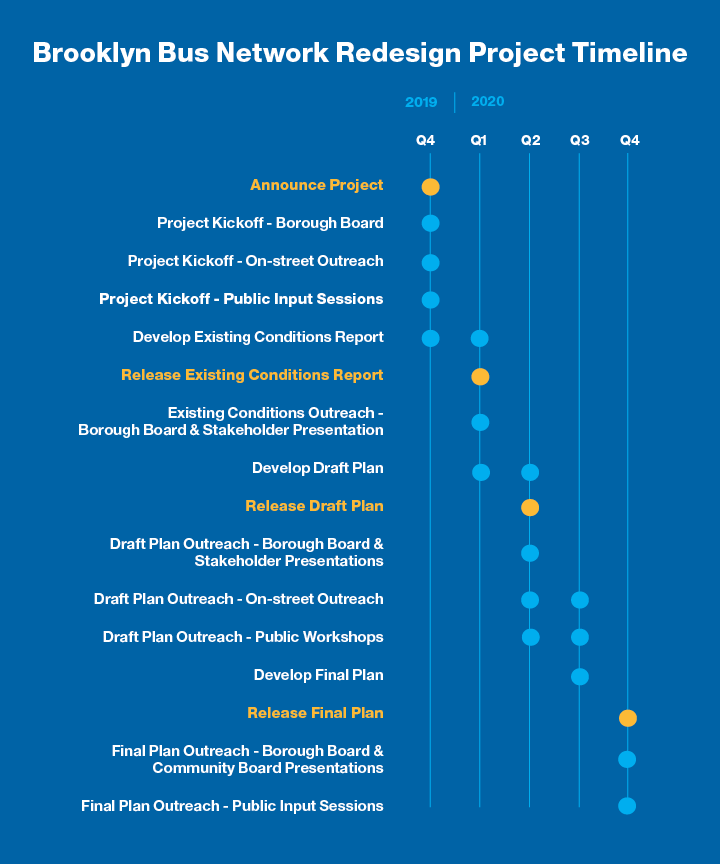