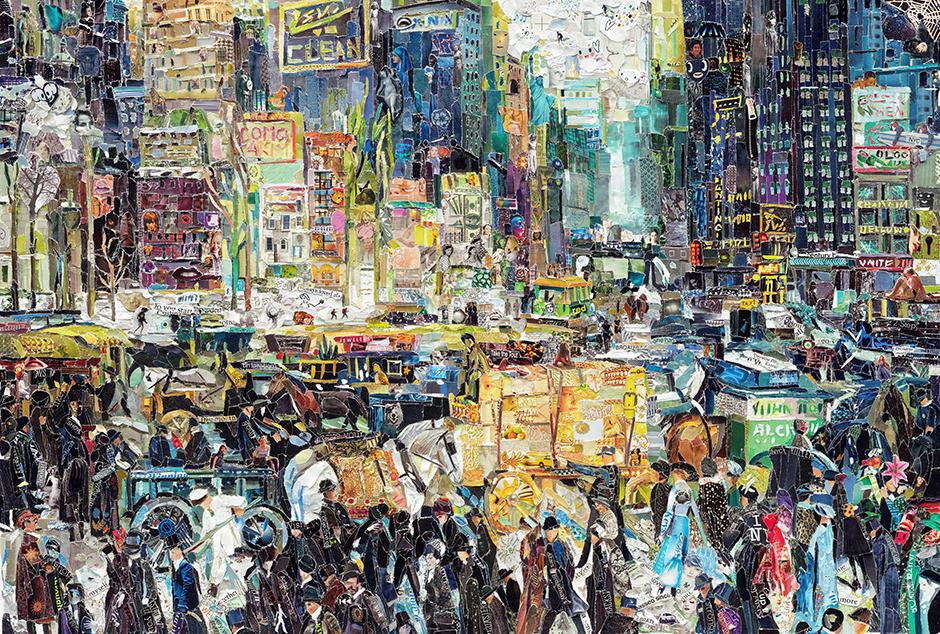 "New York City After Bellows," a photographic collage by artist Vik Muniz, comprises torn strips of magazine pages to remake George Bellows' famous 1911 painting of Times Square, which Muniz then photographed to create the resulting collage. This postmodern take on Bellows’ "New York" melds subject with a technique appropriate for a portrayal of the teeming streets of the city.

When Muniz’s photograph was exhibited in 2011 as part of the "Pictures of Magazines 2" series, New York Times art critic Roberta Smith wrote: “…[I]t is the larger impression — of quavering, fluttering surfaces, of the surfeit of detail, of painting actively overtaken by collage — that holds the eye. This crazed fusion of matter, hand and lens is always at play in Mr. Muniz’s photographs, but until now it has never been achieved in quite such adamant terms.”

Since 2014, the large photograph can be seen in front of the main entrance to the Times Sq-42 St subway station at 42nd Street between Broadway and 7th Avenue. The original painting by George Bellows, "New York," is in the collection of the National Gallery of Art in Washington, D.C., and was last seen in New York City in an exhibition at the Metropolitan Museum of Art in 2012.

Vik Muniz is a Brazilian artist and photographer. Initially a sculptor, Muniz grew interested with the photographic representations of his work, eventually focusing completely on photography. Primarily working with unconventional materials such as tomato sauce, diamonds, magazine clippings, chocolate syrup, dust, dirt, etc., Muniz creates works of art, referencing old master's paintings and celebrity portraits, among other things, and then photographs them. His work has been met with both commercial success and critical acclaim, and has been exhibited worldwide.